Dr. Lukasz MIROCHA is a new media and creative software theorist and practitioner working with immersive (XR) and real-time media. He has recently graduated with a PhD in Creative Media from the School of Creative Media, City University of Hong Kong where he investigated the affordances of emerging software ecologies (e.g. general-purpose game engines) for designing new types of real-time, CGI-based content and 3D environments for art, entertainment and commercial purposes. Engaged in new media/technology research for almost a decade he has published on new media, digital aesthetics and digital design and exhibited artworks in South Korea, Hong Kong and Mainland China. Before his postgraduate studies, he worked as a government-funded researcher, technology journalist, strategic foresight researcher and consultant.
More on his personal website. 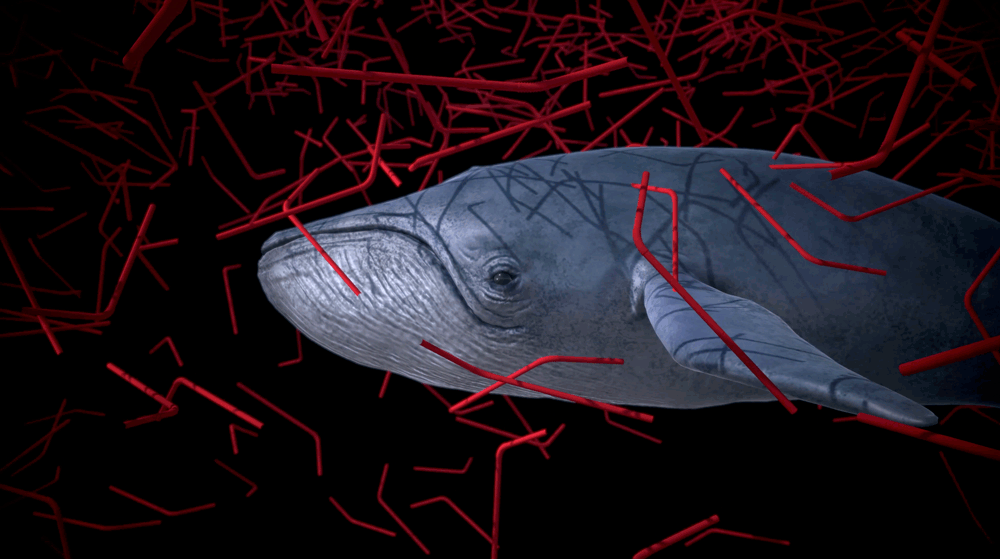 No Straw Days(2019)
The animation fades into a close-up shot capturing the eyelid of a blue whale. After the first few seconds, the viewer may realize that the animal is not swimming in the ocean but is floating in a dark void. The camera is linearly moving away from the whale that seems to be completely still despite the fact that the mammal is moving its flukes and flippers. The space around the animal is being filled with an increasing number of red plastic straws that are falling down from above and are forming a vine-like cage structure around the mammal as the animal is trying to move forwards. The straws eventually obscure the camera's viewport and the whale can be hardly captured from the distance as the camera is fading out.

Vivid and contrasting dominant colors of the scene black (water) and red (straws) and the presence of only one living organism overrun by human-produced plastic commodities emphasize the oppressed mood of the artwork. The visual layer of the animation is complemented by whale vocalization that is eventually suppressed by overlapping mainstream media voiceovers reporting on the issue of ocean plastic pollution, and specifically, plastic straw pollution.

The artwork provides raw and hyperbolic visualization of the consequences of ocean plastic pollution. It does not offer any solution to the problem, nor remedy for the viewer. The animation originates from the author's reaction to over-simplistic global social media/Internet campaigns promoting "No Straw Weeks", "A Day Without a Car" etc. Such initiatives seem to offer illusory instant solutions that may look appealing in today's communication channels dominated by social media narratives, however, they don't offer systemic solutions for very complex challenges arising from the global climate and environmental crisis, which are often narrowed down to isolated phenomena.